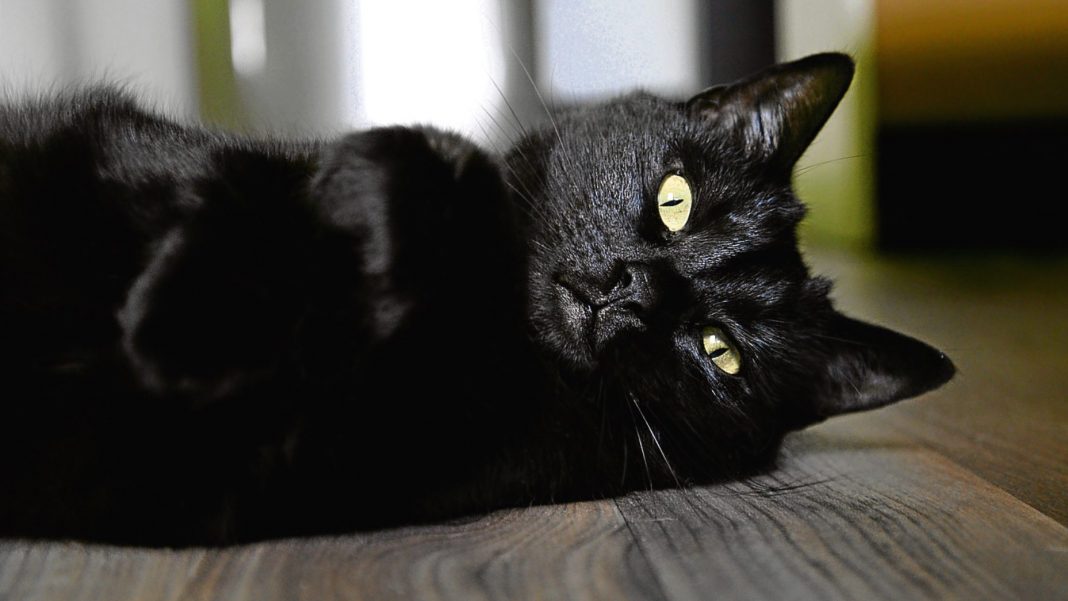 Elegant, mysterious and at times misunderstood – goths and cats have so much in common! But not just in character traits… no! Aside from a goth attitude, some cat breeds also sport an appearance that may especially appeal to goth people! So whether you’re looking for the perfect cat to match your dark style or you’re just curious, without further ado, here are our top five most goth cat breeds!

A new addition to the hairless cat breed family, this creature is the result of crossing Donskoy cats with Scottish Folds. It’s a new and rare breed recognized mainly in Ukraine and Russia but steadily gaining popularity!

The Levkoy’s peculiar angular contour of its head and “stepped” profile, folded ears and large, but not wide almond-shaped eyes give it a creepy goblin-like appearance which may easily appeal to many goths!

Number 4 – The Lykoi cat aka The Werewolf

The Lykoi, also called the Werewolf cat, gained popularity due to its striking resemblance to the way werewolves were depicted in old Hollywood horror flicks. Unlike it’s goblin friend (the Levkoy) this cat breed wasn’t man-made, it is a natural mutation from a domestic short-haired cat. Its lycanthropic appearance captured the dark imagination of cat breeders and now it is an official breed with the name Lykoi which unsurprisingly means “wolves” in Greek. With its name, fame and style this werecat is always ready for Halloween! (just like goths!)

Creeping closer to first place we finally have a contender for goths who love cats with a dark and lustrous coat! (I’m a bit biased, I confess) Commanding respect and awe, this majestic beauty can weigh up to 25 pounds (one of the biggest domestic cats). Despite their wild appearance Maine Coons are known to be quite laid-back and are even nick-named – gentle giants. Having a gentle giant that looks like a black lion or a lynx with an ash-gray mane…what more can a goth want? One might venture to say they even look a bit like werewolves, or wolves at least (no offence, Lykoi) due to their shaggy fur, pointed ears, big size and feral face. In connection to that, they’re even said to have a doglike personality, liking to go for walks on a leash and even playing fetch! The origin of this breed is shroud in mystery, causing controversial theories and even legends to stem from it. I strongly recommend, that after reading our article you go and delve into them! One thing is for certain: this stunning breed naturally occurred in the vast forests of Maine (USA). Mother Nature gave it a lush (low maintenance) coat that comes in an array of colors (thankfully including black), a strong physique and a fantastically feral appearance!  The creators of the Harry Potter franchise also honored this breed by choosing not one but four different Maine Coon cats to play Mrs. Norris! In case you don’t remember this witchy, red-eyed kitty, here is a vivid reminder!

There is a fair share of hairless & semi-hairless cat breeds out there, but no one beats the Sphynx! These cats are the perfect concoction of exotic, weird and majestic! You might be surprised to find out that despite their Egyptian name, this is a man-made breed originally bred in Europe in the 1960’s while the contemporary Sphynx breed is known as the Canadian Sphynx. The lack of fur makes the Sphynx’s face look very haggard, especially when meowing or yawning they closely resemble vampire bats! Their ancient name and slender silhouette also remind us of the cats the Egyptians used to worship (I can’t say I blame them!) Despite this haughty exterior, the Sphynx cat is fun-loving an energetic! If you’re wondering about their purrrsonality check out this video of the cat whisperer Jackson Galaxy negotiating with one of these cat deities in an episode of “My cat from Hell” (gotto love that name):

Of course there will be people (even amongst goths) who think the furless form of the Sphynx is a bit too gaunt and creepy… but Kat von D and her Sphynx cats beg to differ.

Finally, we have reached the crowned first spot! To my fellow gothic ailurophiles (dainty word, right?) our choice for most GOTH cat breed may come as no surprise… They are solid black: all black coat, black soles, black nose and mouth; their wide-open eyes stare into your Soul… They are the Bombay cats! Of course, for our first position, we HAD to choose a cat breed that comes exclusively in our favorite color! As a matter of fact, they were bred in 1965 by Nikki Horner (from Louisville, Kentucky) to look specifically like miniature black panthers!  The Bombay kittens are pretty much born into this world with the color of a goth’s soul, however keep in mind that they may be subject to “rusting” as seniors. Despite that, there is no other cat breed that comes in a deeper shade of black than the Bombays!

Another hauntingly lovely feature which contributes to their witchy aura is their big and round eyes that come in a copper, gold or green color with a sharp slit. This creates the “staring into your Soul” effect. I can already sense how the goths who are also die-hard J.R.R Tolkien fans want to get a Bombay cat and name it Tevildo!

But underground references aside…  For centuries black cats have gone paw in hand with everything magic, dark and mystic in this world…they have even become a universal symbol of all that! This makes the Bombay cat the perfect spirit animal of witches, wizards and goths alike! Or in some cases, this black beauty would be the witch herself, shape-shifted into a gothic feline form…

This concludes our top 5 most goth cat breeds rating! We hope you’ve had fun, learnt something new about cat breeds and who knows maybe you’ve found your spirit animal among them!

And the winners are… Vampire Goddess 2019

And the Winners are… Vampire God*Dess 2020