Who are the traditional Goths?

Only Goths themselves can understand this classification. Representatives of other societies barely distinguish them from other fans of everything black and creepy. Goths often encounter stereotypical perceptions. Only better understanding will help to overcome the problem and increase awareness of who Goths really are.

The ancestors of this movement are traditional Goths. They mostly bypass such music genres as EBM. Trad Goths are peculiar old-schoolers. They are the first of their kind and have already inspired more than one generation. They began to appear in the 80s. The music of that decade made its own contribution. They still have voluminous black hair in contrast with pale skin striking looking people back in the 80s as many were those who joined this movement. Their image was certainly inspired by punks.

The leather, the chains, the fishnet, the skulls and bats. Traditional Goths and traditional black. An important component of their appearance are fishnets. Especially for women, who like to wear short dresses and skirts. Men often wear a net on their wrists as decorative gloves. Simple chains are actively used by traditional Goths, both men and women.

Goth women liner with a wider application than how it is usually done with typical makeup. They barely can go out without black lipstick; and if the person manages to acquire a reddish tint from the sun, then this is smoothed out with almost white tonal cream. And we must not forget about shoes with huge platform soles, the higher the better.

Everything began with the music

Since traditional Goths were inspired by music, it is necessary to note which bands and sub genres makeup their playlists. These types of Goths will undoubtedly be able to quote the songs of the British Gothic rock band Bauhaus. A known favorite are the Sisters of Mercy. They listen tirelessly to Joy Division. The band is essentially not Gothic, but post-punk is close to traditional Goths in its spirit.

Society often describes Goths as sensitive individuals with anti-social tendencies. However, this is not always true. They show interest in supernatural and dark aesthetics. Gothic festivals unite Goths from all over the world. Since they occur only on certain dates, for every day you have to come up with something different. They hang out at Goth clubs, concerts, Goth clothing shops, and record stores that cater to the subculture. They hang out with groups in parks and various places outdoors as well.

And when it comes to philosophy

Always strive for more, seek beauty even in the world in which it does not exist, always look at all aspects of life, without turning a blind eye to them. Trying to change every gray day, introducing emotions and feelings through music, clothing style, make-up and other sources. To melt all your emotions, both positive and negative, pain, despair into life energy. Feel fine with societal deviations: a gloomy mood, irony, strange views on life, and take strength from all of this. Goths have the so-called Gothic worldview or, in other words, “life philosophy” combining two main elements: absolute individualism and unusual romance. And this is their philosophy, with which they confidently step in dark and so alluring apparel. 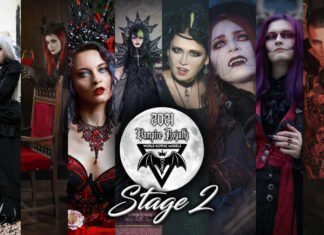 WGM Team
👑 VAMPIRE ROYALTY 2021 First Stage Just Ended! 👑The competition so far was incredibly exciting and dynamic! All the models deserve to win, but The...

The VAMPIRE ROYALTY Contest for 2021 is finally here!