Warning! The following article is not for too sensitive people. It is not recommended for children under 13.

Christmas is coming! Most people are excited and cheerful about the presents, meeting the loved ones, and the joy this holiday brings… But you know, there are always those kinds of people who love telling spooky stories and legends in front of the fireplace while drinking Glühwein and eating delicious roasted chestnuts. So if you want to surprise your friends with a bunch of creepy ghost stories and get their attention around the holidays, then this article is exactly for you!
A lot of peoples have creatures from their folklores whom they used to scare children with, in order to make them behave well at Christmastime. Most of these legends have pagan roots. No matter they exist for hundreds of years ago, some of them can still give goosebumps to many people… Even today when the film industry is loaded with horror movies with abhorrent super-realistic visual and sound effects.
These urban legends have nothing to do with the sweet, grumpy character Grinch from the 2000 Taylor Momsen movie “How the Grinch Stole Christmas”. These mythical stories contain a lot of violence and gore, so we don’t recommend you tell them to your children especially before going to sleep.

1. Krampus
We’ll start with one of the most famous monstrous personages connected to Christmastime. His name is derived from the German word for “claw” (ger. Krampen). Krampus is an evil half-demon, half-goat who beats and punishes children dressed like Santa Claus (or St. Nicholas).

Some claim that he is the Devil himself. He is thought to show up in town on the night of December 5th (a day before December 6th, St. Nicholas Day), which is known as Krampusnacht or Krampus Night. According to the legends, the satanic creature leaves lumps of coal in children’s stockings, beats and kidnaps kids putting them in his bag and taking them to eat them or throw them straight to Hell.

People from Germany, Austria, Slovenia, and Northern Italy celebrate Krampus Night on December 5th, dressed like krampuses to chase away the evil spirit. Some regions of Germany are recently trying to bury this legend and the accompanying festival because it is deemed too violent and it has turned into an act of vandalism nowadays.

There is a 2015 horror movie ‘Krampus’ based on the legend of the monster.

2. Farmhand Rupert
This old man from the 17th century German and Austrian folklore was thought to be a companion of St. Nicholas, but unlike his benevolent friend who gave presents for the good children, Rupert was mean and abusive and often dealt with the mischievous kids.

Farmhand Rupert or Knetch Ruprecht was often represented in a filthy brown robe and had a long black or white beard. He was generous with some kids, though. He asked them if they could pray and if they could, he gave them an apple or a piece of gingerbread but if they couldn’t they received a lump of coal and severe punishment — he whipped them with his switch (stick) or hit them with a bag of ashes.

It doesn’t sound so scary for now but there was a legend about Farmhand Rupert that once he was about to kill 3 bad children by cutting their heads off and eat them afterward, but St. Nicholas saved their lives.

The name Ruprecht (a German Form of Robert) was a common name for the Devil in Germany.

3. Belsnickle
Belsnickle is a creepy old man similar to Farmhand Rupert. He is dressed in filthy rags, has a long reptile tongue and covers his face with a strange white mask to hide his true identity. He also gives candy to children who have been good but beats kids who have misbehaved.

4. Frau Perchta
The stories of Frau Perchta also have a German and Austrian pagan origin; they exist long before Christianity. Frau Perchta (in German “Frau” stands for woman or missis) is an ugly witch who lives in the forest and roams around the town and villages during the 12 days of Christmas (the period between December 25th and January 6th).

She rewards good people by putting a silver coin under their pillow but has a gruesome punishment for the bad ones – she cuts their bellies open, takes out their internal organs and replaces them with garbage (straw and pebbles).

5. Anne Boleyn’s Ghost
Locked in the Tower of London because of her adultery, Queen Anne Boleyn was decapitated by her own husband Henry VIII.

Her ghost can be spotted around the Hever Castle and the Tower of London at Christmastime with her head tucked under her arm.

6. Elf on the Shelf
Particularly this story is not such a scary one unless you are too afraid of being watched or followed, and if you have a phobia of possessed dolls… The urban legend of elf on the shelf is comparatively new — it originates from a 2005 Carol Aebersold children’s book of the same name. Basically, the story is about porcelain elf figures which are alive and watch if children misbehave during the month of December and then report them to Santa Claus.

Kids shouldn’t move the elf, they can’t get rid of it… Even if a kid barely touches the elf, it loses its magical powers. Therefore, it can’t return to Santa Claus, which means that the kid is automatically deemed naughty and will get no present for Christmas. What is even more irritating about those creepy elves is that they pull pranks around the house while the family is away.

7. La Befana
La Befana is an Italian female version of St. Nicholas but pretty creepier than him. She is a witch with black clothes from head to toe, flying on a broom, delivering presents for the children who have been good, and coal or misfortune to the ones who have behaved badly.

8. Consoda
Consoda is a Portugal tradition dedicated to the dead. Families gather for a big feast early in the morning of December 25th, to honor their passed relatives. What is spooky about this holiday is that they lay out plates of food not only for themselves but also for their deceased family members to invite their spirits to join them for breakfast right before Christmas.

9. Gryla and the 13 Yule Lads
These characters are part of the national folklore of Iceland. Gryla is an abhorrent troll-witch who lives in the mountains with her 13 children, better known as the Yule Lads. She kidnaps children who misbehave and endeavors them whole, to satiate her perpetual hunger.

10. Jolakotturinn
Jolakotturinn or the Yule Cat inhabits the mountains of Iceland. It is the pet of the troll Gryla and is quite dangerous, too. The legend of this enormous carnivorous cat is created to encourage hard work before Christmas, as most people are prone to laziness around the holiday period.

It is believed that hardworking people receive new clothes for Christmas. The lazy ones who wear their old clothing are tortured and eaten by Jolakotturinn. The Yule Cat attacks anyone who doesn’t wear new clothes during the Christmas season.

11. Kallikantzaros
Kallikantzaros or karakonjul is an evil spirit from the South-Eastern European countries’ mythologies (Greece, Bulgaria, Turkey, Serbia, Macedonia, Bosnia). These grotesque goblins saw trees, trying to destroy the earth, they wreak havoc in people’s homes, spoil food and make the 12 days of Christmas a living hell. A kallikantzaros lives only through the period between December 25th and January 6th (the so-called “dark days” by Christians).

It is depicted as an ugly creature with animalistic features, big head, horns, long tail, hair all over its body, in some versions with one eye and one leg. It lives underground and has a foul smell. In the past people believed that children born during the 12 days of Christmas may have the misfortune to turn into karakonjuls, that’s why they wrapped the babies in straw for prevention.

12. Kukeri
To end with something positive… In Bulgaria and other Balkan countries, there is a pagan ritual called Kukeri. Young men from many towns and villages put on heavy wool costumes with scary wooden masks and large bells attached to their belts, then they go on a big parade around the villages to expel the evil spirits. This tradition takes place during the last Christmas holidays.

We hope you enjoyed reading this article and we wish you peaceful Christmas holiday. Which story did you find the scariest?

21 Reasons Why You Should Adopt a Black Cat 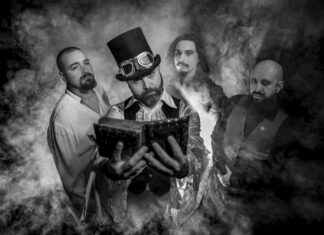 The Bulgarians VELIAN with a New Single and Lyric Video “Star...

WGM Team
The Bulgarian symphonic gothic metal band VELIAN released a new single, accompanied by Lyric Video. The song, called "My Star", will be part of...